Jurassic World – The Ride, Everything There Is To Know

The updated Jurassic World ride has scored rave reviews, providing a classic Jurassic Park experience while turning the production value up to eleven.

After a lot of fanfare, Universal Studios Hollywood opened Jurassic World – The Ride to the public in July 2019. Replacing the old fan-favourite, Jurassic Park: The Ride, the new iteration brings a number of improvements that radically change the experience, both from a thrill-seekers perspective and a thematic one too. Fortunately for fans old and new, the ride has proved to be a serious winner.

In this guide we take a deep dive into the Jurassic World ride, and give you everything you need to know before you jump into its terrifying clutches.

What is Jurassic World – The Ride? 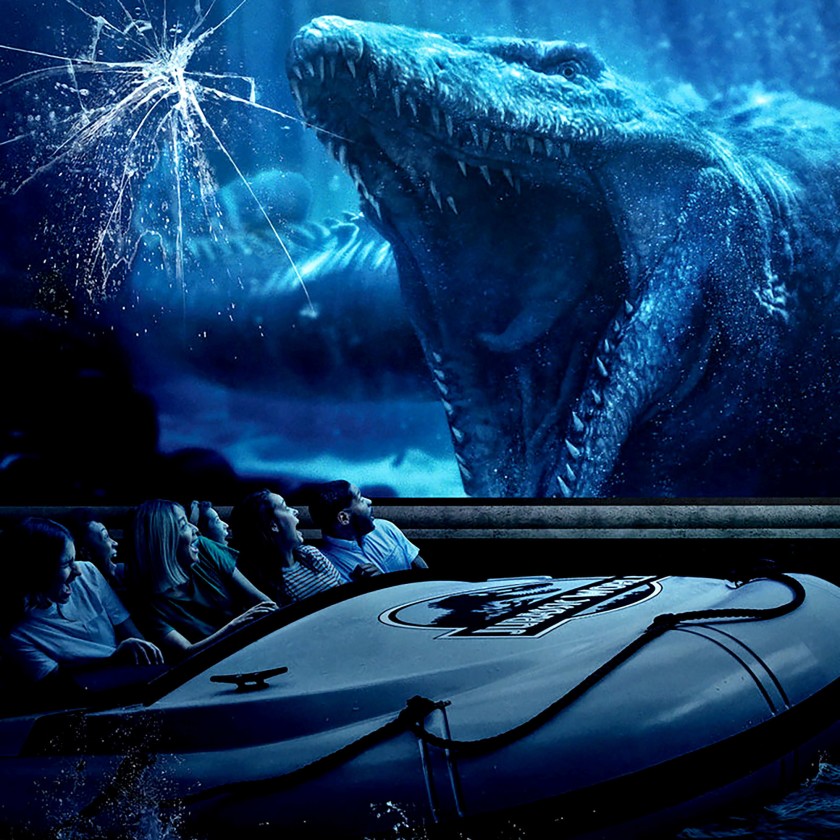 Opened in July 2019, Jurassic World – The Ride, is one of the most talked-about thrill rides at Universal Studios Hollywood. It replaced Jurassic Park: The Ride, which closed in September 2018. The new version is not a complete overhaul – as it still retains some of the same elements from the original, but it’s been massively updated.

At its core, the ride’s goals are simple: provide thrills and get everybody drenched. And it delivers from the beginning. Aided by stunning special effects, your boat is a target for the predatory monsters in the park – from the Mosasaurus to the goliath that is Indominus Rex – and culminates in a terrifying drop.

What happens on the ride?

The ride’s first surprise happens almost immediately, as your boat wades into a large aquarium inhabited by the monstrous Mosasaurus. The beast thrashes about in the deep water, chomps on a great white shark, and soaks you as it crashes itself against the aquarium walls.

Later, as your boat approaches the ominous Predator Cove, it becomes clear that something is going wrong. Crackled intercom warnings urge you to remain calm, but it’s not easy as you ascend into darkness, passing smashed screens that continue to issue safety warnings. And all the while, the growl of dinosaurs grows steadily louder.

It’s inside Predator Cove that the thrill ramps up. You plunge into its dark depths, and either side of your boat are shrieking, terrifying dinosaurs. There’s only one path to freedom – a narrow path beneath the feet of the giant, snarling T-Rex.

What ensues is the ride’s climax: the steep 85-foot drop to safety.

What has changed from the original ride?

The biggest change comes with the ramped-up production value, which is evident right at the beginning of the ride. The ‘aquarium’ is made up entirely of crystal clear special effects screens, showcasing the formidable Mosasaurus. It’s shockingly realistic, down to the timed gush of water that falls as the monster crashes against the screen.

The panicked appearances of Chris Pratt and Bryce Dallas Howard also add a movie-authenticity to the experience, one that was missing from the original ride. The tension builds more intensely, and the payoff is better too; the chaotic shrieking and stomping of the predators as they appear out of darkness easily eclipses the single T-Rex that featured previously.

After 22 years of service the old ride was admittedly starting to look worn around the edges, from the park design to the dinosaur models themselves. Jurassic World – The Ride, is a welcome refresh, and overall a more impressive experience.

What has stayed the same?

Not everything is completely different. After you exit the Mosasaurus aquarium, the next stretch of the ride remains identical to its predecessor, as docile stegosaurus’ cause a splash beside sprouting geysers.

And of course, long-time fans of the ride will be happy to know that its finale – the thrilling 85 foot drop – remains untouched.

How does it relate to the Jurassic World movies?

Taking advantage of the renewed popularity of the franchise, there are plenty of nods to the latest Jurassic World films. As your boat flees from peril, the voices and faces of the film’s stars Chris Pratt, Bryce Dallas Howard and BD Wong attempt to guide you to safety. There’s also a performance from Blue the velociraptor.

Who is allowed on the ride?

Where is the ride located?

The ride is located in the Lower Lot at Universal Studios Hollywood.

How wet will I get?

As a rule, you’ll get drenched. The ride has multiple attempts at doing so, starting very early on. If you’re looking to limit the level of soaking, try your luck at the back of the boat and on the right hand side.

How long is the queue?

The ride is popular, and becoming increasingly so. At quieter times, expect to wait between 15-30 minutes. If the park is heaving, don’t be surprised if your wait is closer to an hour.

Is it suitable for young children?

The height limit for the ride is 42” (107cm), but for young children it will certainly be on the ‘scarier’ side. The effects and models are very realistic, and the large drop at the end is not for the faint hearted. If your kids are easily scared or shaken, it might be one to miss.

Where can I get tickets?

To experience the revamped Jurassic World – The Ride for yourself, pick up the best-value Universal Studios Hollywood tickets and find exclusive UK deals.