Madame Tussauds London have announced some fab new additions lately from the worlds of sport, showbiz and more! Here’s a run-down of the newest stars you can meet there, and get a profile photo that’ll be the envy of all your friends (we won’t tell if you don’t!)

Fans of the “American Hustle” star, get ready to go weak at the knees because you can now get closer than ever to him!

Madame Tussauds London recently unveiled a new wax figure of Christian in their A-list area, and he is definitely red carpet-ready, wearing a sleek black suit with perfectly tousled hair.

The startlingly life-like figure will be in London for a short period before appearing at a new Madame Tussauds attraction launching year in San Francisco.

Katy’s figure is visiting from Madame Tussauds Sydney and was first unveiled by the star herself in LA last year. She wears one of the celebrated singer’s most flamboyant costumes, which was recreated exclusively for the wax likeness by Katy Perry’s costumiers.

Come and meet Katy – and have a nibble on her special edible set – throughout the Easter school holidays! 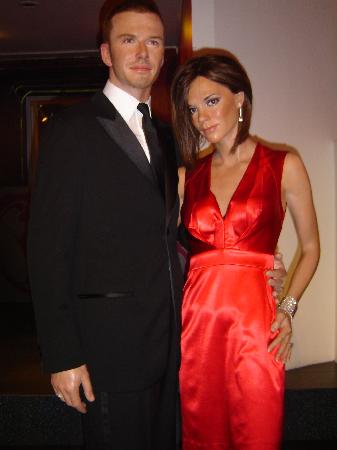 Plans are in the making to honour the ultimate power couple with brand new wax figures in time for their 15th wedding anniversary in July 2014!

Details are under wraps at the moment, but it’s possible that David and Victoria themselves will be involved in the styling of their figures – Victoria’s likeness may even wear an outfit from the AW14 line from her own VB range!

The new figures will replace existing ones, which were both created in 2004, and will feature in the Party area.

Olympian and national treasure Mo Farah was left doing a double take when he met with two remarkably life-like waxworks of himself at Madame Tussauds!

Mo unveiled his figures the day after finishing eighth in the London Marathon, and said he was taken aback by their likeness.

The Olympic champion is portrayed in his trademark “Mobot” pose, and is featured in the interactive sports zone along with fellow Olympians Usain Bolt, Tom Daley and Jessica Ennis.

Celebrate the World Cup with footballing great Bobby Moore (from May)

Fans were asked to vote for the “World Cup Great” they most wanted to see immortalised in wax for the 2014 World Cup, and Bobby Moore was the overwhelming winner with more than 90% of the votes!

The finished figure will mark 48 years since Bobby captained England to their historic 1966 World Cup win.