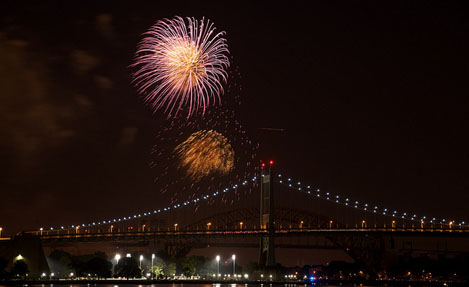 There’s lots of things to do in New York this summer and we’ve come up with a selection of just some of the events you’ll see happening around the city from July through to September!

Festivals and Events in NYC summer 2014

The Macy’s Fourth of July firework display returns for another year! Grab the best views from Brooklyn Bridge Park and Brooklyn Heights Promenade. The show kicks off at 9pm but get there early before all the best spots are taken!

How many hot dogs could you eat in 10 minutes? Possibly not as many as the skilled hotdog eaters taking part in Nathan’s Famous Hot Dog Eating Contest in Coney Island this 4th July! The world record currently stands at a massive 69 hotdogs – will it be beaten this year?

Over 180 dragon boats from around the world compete in the Hong Kong Dragon Boat Festival every year, a sight you won’t want to miss! With live entertainments and traditional food also on offer, there’s plenty to see and do at this lively gathering which runs from the 9th to the 10th August at the Flushing Meadows-Corona Park in Queens, New York.

Calling all tennis fans! See if last year’s champions Rafael Nadal and Serena Williams can keep hold of their titles in the US Open, the final Grand Slam Tournament of the year, which kicks off in New York City on the 25th August 2014.

At 11am on the 1st September the streets of Brooklyn come alive with music and fresh food for the annual West Indian American Day Carnival – a celebration of all things Caribbean! A fantastic way to experience the cultural diversity New York City is famous for.

Historical Locations to visit this summer in NYC

Ellis Island saw approximately 12 million immigrants pass through its gates during the years it operated. Located in New York Harbour next to the Statue of Liberty it was the first port of call for those hopefuls arriving in the United States for the first time.

Now open again to visitors following the Hurricane Sandy devastation, you can visit Ellis Island as part of the Super New York Tour and with the New York Citypass, as well as many other iconic locations around New York!

A truly breath-taking sight and an important part of New York’s history. See the two enormous pools and 30ft waterfalls that make up the 9/11 Memorial, which sits where the Twin Towers used to stand. Booking in advance is strongly recommended as tickets can sell out fast.

You can visit the 9/11 memorial on the Heroes of the World Trade Center Tour and get further insight into the events that happened that day.