8 Rollercoasters To Ride This Summer One of the big draws of the summer is to round up some friends and get yourself into a theme park for a day, and dare each other to go on some epic thrill rides (because there’s always one who won’t take their feet off the ground, isn’t there?)

If that one person is you, then these rollercoasters might not be the ideal “starter” coasters for you, but if you’re an absolute speed demon and thrill seeker, you’re going to want to book yourself a front row seat at any of these awesome rollercoasters this summer!

The Big One – Blackpool Pleasure Beach

The original, proper, big daddy of the lot. When it opened in 1994, The Big One was the tallest rollercoaster in the WORLD. It may have lost that title since, but crowds still flock to the UK’s tallest coaster at Blackpool Pleasure Beach every summer. There’s a lot of good stuff to choose from at THORPE PARK Resort, including The Swarm, the first winged coaster in the UK, and Walking Dead: The Ride, which opened this year. But for sheer thrill, we can’t ignore Stealth, which goes from 0-80mph in under two seconds, and is the second tallest rollercoaster in the country. An absolute blast for the speed freaks.

Of course, we can’t talk speed without mentioning the fastest and tallest rollercoaster in all of Europe – Red Force. The 112mph monster lives at Ferrari Land, in PortaVentura World and is an absolute must-do for speed demons. Nestled in Lightwater Valley in Yorkshire lies Europe’s longest rollercoaster at 2.2km long! It’s the second-longest in the world (beaten by Steel Dragon 2000 at Japan’s Nagashima Spa Land… but only by 0.2km!) and a complete trip on it takes a lengthy 7 and a half minutes. 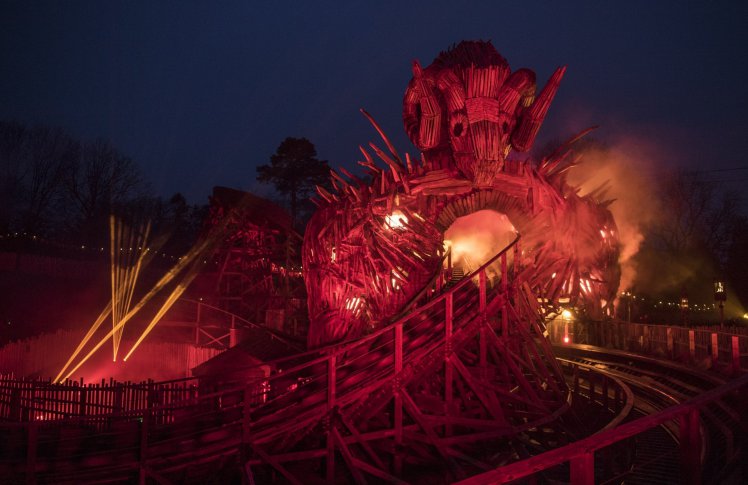 The twisty and windy wooden, fiery rampage of Wicker Man was unleashed at Alton Towers earlier this year. You travel through the centre of the 18m structure three times during your three-minute ride, and dodge the flames as you go.

An oldie but a goodie! One of the only surviving rides from when Disneyland Paris opened in 1992 but still capable of all the thrills you’d want from a modern ride. But there’s so much to pick from at Disneyland Paris, you’re guaranteed of a good time! How good is Icon? Well, we don’t know yet… it doesn’t open for a couple of weeks. But Blackpool Pleasure Beach’s newest rollercoaster looks like it’s going to bring in the coaster fans this summer. With two inversions and a top speed of just over 50mph, there’ll be queues for Icon from May 25th onwards!