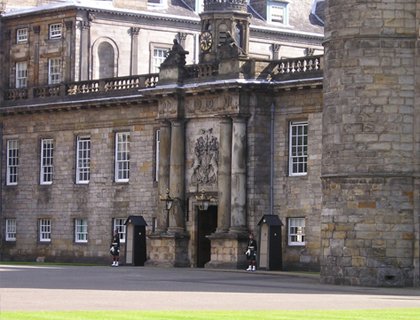 How to get to Palace of Holyroodhouse

Don’t Miss: A visit to the Great Gallery, hung with Jacob de Wet's portraits of the real and legendary kings of Scotland!

The Palace is perhaps best known as the home of Mary, Queen of Scots, and as the setting for many of the dramatic episodes in her turbulent reign. Mary was married at Holyroodhouse and witnessed the brutal killing of her secretary Rizzio by her jealous second husband, Lord Darnley, in her private apartments.

The Palace briefly served as the headquarters of Bonnie Prince Charlie during the 1745 uprising.

Today the State Apartments are used regularly by the Queen and other members of the royal family for state ceremonies and official entertaining.

The Royal Apartments reflect the changing tastes of successive monarchs and are renowned for their fine plasterwork ceilings and magnificent furnishings, particularly the unrivalled collection of Brussels tapestries.

One of the most famous rooms in the Palace is the Great Gallery, hung with Jacob de Wet's portraits of the real and legendary kings of Scotland.

Another display focuses on the Order of the Thistle, the highest honour in Scotland. The Order honours Scottish men and women who have held public office or who have contributed in a particular way to national life.

Shown alongside historic insignia is an example of the mantle worn at the Thistle Ceremony at St Giles’ Cathedral in Edinburgh, which the Queen attends during her visit to the Palace each July.

The Queen's Gallery at the Palace of Holyroodhouse in Edinburgh hosts a programme of changing exhibitions from the Royal Collection.

Palace of Holyroodhouse Tickets – Getting There

By Road: A public car park is situated alongside the Palace.