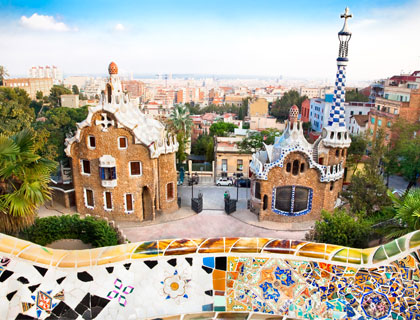 How to get to Sagrada Familia & Gaudi Buildings

Don’t Miss: The magnificent interior of the Sagrada Familia!

Barcelona: Latest from the Blog

The Sagrada Familia & Gaudi Buildings Tour takes you deep inside the incredible Sagrada Familia Cathedral and to see the rich legacy of parks and architecture left to the world by artist Antoni Gaudi.

One of the greatest artists and innovators of his time, Antoni Gaudi bequeathed his architecture to the people of Barcelona and the world.

Gaudi buildings and parks have been enjoyed by countless thousands of people since his death in 1926.

This 5-hour afternoon excursion begins with a visit to La Sagrada Familia (translated as The Holy Family) Cathedral – one of the most visited Gaudi buildings in the world.

Known as Gaudi’s unfinished masterpiece and under construction since 1882, this vast gothic basilica is not expected to be completed for at least another 80-years!

Follow your guide outside the Sagrada Familia and take time to admire the facade of this magnificent building – as richly adorned and carved as the interior.

Next, sit back and relax with your camera at the ready on a panoramic tour of the two famous Gaudi apartment buildings in the elegant Paseo de Gracia – the Casa Batllo and La Pedrera.

Parc Guell, today protected by UNESCO, is your next stop. The quirkiness of this wonderful space perfectly highlights Gaudi’s love of whimsical and fanciful design.

During the Gaudi tour, you’ll also visit the only Gothic Church in Catalonia which was entirely completed – the magnificent Santa Maria del Mar Cathedral.

The Sagrada Familia & Gaudi Buildings Tour comes to an end outside the Picasso Museum.

From here, you can return with your tour guide to the start point near the Sagrada Familia or head inside the Picasso Museum (own expense) and continue your tour of Barcelona independently.

From Nov until March this tour will operate on Mondays, Tuesdays, Thursdays, Fridays and Saturdays.

Tour Time: 3pm (April to October). From Nov to March the departure time will be 2pm

Guide: You will be accompanied by an English-speaking guide.

Transport to and from the departure point.