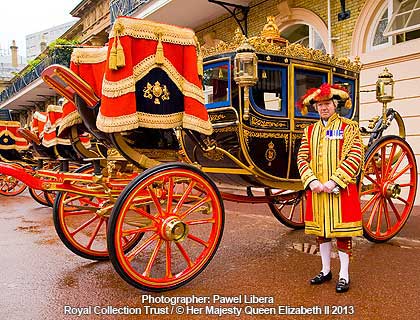 How to get to Buckingham Palace

Availability: Most days throughout the year.

Don’t Miss: A glimpse of the glittering Gold State Coach!

Get a unique insight into the Royal Mews, the department of the Royal Household that provides transport for The Queen and other members of the Royal Family.

Visitors can see the Gold State Coach which was last used during The Queen's Golden Jubilee in 2002 to carry Her Majesty and Prince Philip to the Service of Thanksgiving at St Paul's Cathedral.

The Royal Mews is one of the finest working stables in existence. For most of the year you’ll be able to meet the working horses that play an important role in The Queen's official and ceremonial duties.*

The horses are mainly Cleveland Bays, the only British breed of carriage horse, and the Windsor greys, which by tradition always draw The Queen’s carriage.

*The horses are not always on view as they may be on duty, undergoing training or having a well-deserved rest away from London.

The Royal Mews is not available to visit over the Christmas period, during state visits and royal events.

Included:
Entry to the Royal Mews.
Not Included:
Transport.

The Royal Mews - Buckingham Palace – Getting There