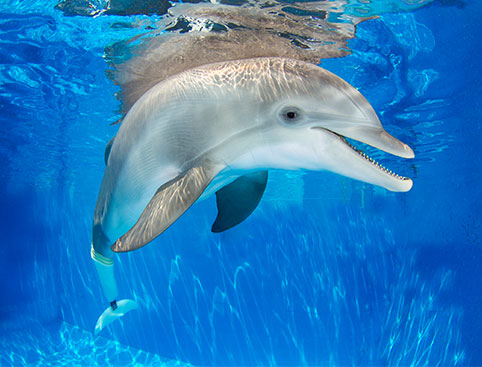 Don’t Miss: The chance to meet Winter the Dolphin!

Visit the beautiful Clearwater Beach and see one of the most famous dolphins in the world on this day trip from Orlando! Winter the Dolphin lost her tail in an accident and was rescued by the Clearwater Marine Aquarium. She is the star of the major motion picture “Dolphin Tale”, which is based on the story of her life.

This is a perfect family day out from Orlando, beginning with transport to the West Coast, where you can spend some time relaxing on Clearwater Beach.

You’ll have time to grab some lunch (not included) before heading to the Clearwater Marine Aquarium, a unique facility with underwater viewing windows, roofless dolphin pools, a hands-on stingray beach and many other animal homes and exhibits.

Here you’ll meet Winter the Dolphin, who was rescued and rehabilitated at the aquarium after having her tail caught in a crab trap line.

After a long struggle, Winter lost her tail, but not her spirits. She was fitted with a prosthetic tail and is now an energetic dolphin that is an inspiration to everyone who meets her!

Winter also became the star of the major motion picture “Dolphin Tale”, based on her life story.

You’ll also get to meet the other marine creatures that live at the Aquarium, including turtles, otters and more!

Ride the Jolly Trolley up to Historic Clearwater Downtown where you can see the Winter Dolphin Tail Adventure Exhibit.

This fun and educational exhibit takes you inside the movie and takes 3D to a whole new level, with re-built scenes, movie images and actual props used in the “Dolphin Tale” movie.

Availability:
Tuesdays and Fridays.
Transfers:
Roundtrip transportation is provided from the Orlando.
Departure and Return Times:
Departure from Orlando at 8.45am. Departure from Clearwater at 5pm for arrival in Orlando at 7pm approximately.
Duration:
Please allow a full day for this trip.
What to Take:
Please remember to bring your swimwear/beachwear and camera!
Included:
Return transportation from Orlando
Not Included:
Gratuities.
Lunch